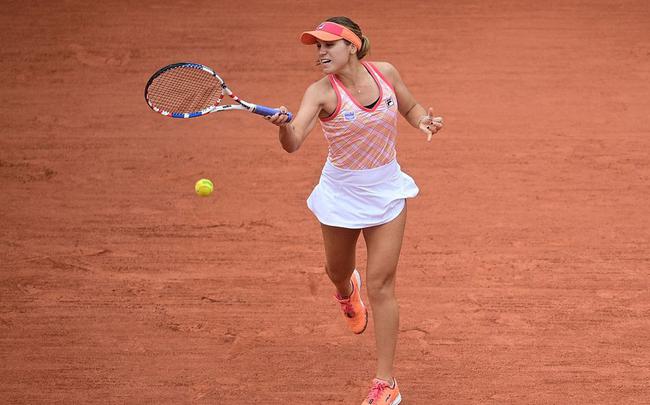 France, Paris-September 29, local time, the 2020 French Open will continue the first round of women's singles. No. 4 seed Kenning beat Samsonova 6-4 3-6 6-3 in a matchup spoiled by rain, and passed the first game.

This is the second time the Russian teenager, ranked 125th in the world, has played in the Grand Slam tournament. She is eager to win the first victory. In addition to dangerous opponents, Kenning also needed to overcome his own volatility-the game was suspended for more than an hour due to rain, and the new Australian Open champion failed to continue the previous state after replaying.

In the end, Kenning still fought back after falling behind in the final set. He scored 26 winning points and broke the opponent's serve six times. After 2 hours and 11 minutes of hard work, he won his first clay court victory this year.

"I am very happy to win this game," Kenning said at a post-match press conference. "The first round of the Grand Slam is always quite tricky.

"The conditions of the game were not very good. It was really difficult on the court. It rained halfway through and we had to go back indoors, and then it started to rain again. This situation is not easy, but I have been fighting and finally found a way to win. , It makes me very happy."

"I don't think I have performed at my best level. Of course, my opponent played very well. I am very happy to pass the first round of the test."

The game was scheduled to take place at Susan Langlen Stadium. Kenning had a very strong opening performance, breaking serve early to establish a 2-0 lead. However, she failed to open the gap with her opponent, Samsonova quickly broke back, and the two sides exchanged a serve and then reached 3-3.

Kenning continued to put pressure on his opponent's weak second serve, and later saw a breakthrough opportunity again. At 4-4, one of the six double faults in the first set by Samsonova brought a decisive break for the No. 4 seed, and the American girl did not hesitate to win 6-4. As the rain got worse, the game had to be suspended midway, and both players left the field.

"I can't wait to continue the game," Kenning said of the nearly two-hour delay. "I want to ask how long they will have to wait. I really want to go out and play. I don't want to sit here and procrastinate. I didn't fight until late."

"I know she will improve her state and make some changes after losing the first set."

Kenning's expectations were completely correct. After the game resumed, Samsonova took the lead in breaking serve to seize the opportunity 3-0. The Russian teenager tried to reduce the number of rounds for each point, frequently blasting the winning points on both sides of the forehand and backhand, and quickly expanded his advantage to 5-1. Kenning recovered a break but it was too late, Samsonova pulled back a set 6-3.

After another brief rain stop, Samsonova brought the fiery touch to the deciding set, and even broke the belt to maintain the upper hand 2-0. However, Kenning always patiently dealt with his opponents, broke back after two rounds, and then took a 3-2 lead.

As Samsonova's condition declined, the new Australian Open champion took over again. She broke serve again at the end of the game and then ended the fight in her serve win.

"When I participated in the competition as a big seed, I felt that people were watching my performance, and the pressure from the outside world was even greater," Kenning said. "But this is also a good thing, which means they know that I am strong. Very tenacious, not so easy to deal with."

"I just want to work hard to play every game, even if people are watching my performance silently."

Two weeks ago, the American girl opened the French Open in Rome to prepare for the battle, but lost 12 consecutive games and was swept by the former world number one Azarenka 0-6 0-6. After coming to Paris, the sixth in the world came out of the shadow of swallowing a double egg and was out of the game at the last stop and advanced to the second round for two consecutive years.

"That game was really unbearable," Kenning smiled bitterly. "Of course Vika played great. I am convinced. She played very well, and I obviously didn't find my rhythm."

"After that, I came to Paris and had a week or so to train and adapt to clay. I tried not to think about that game."

Kenning will face Romanian Bogdan in the next round, who defeated Babos 6-4 6-2.